I recently was going thru my wallet and found a gift card in it for Target that was given to me for my Birthday in 2009. I had no idea it was in there so I logged on to Target.com to find out if there was any money on it and to my surprise I still had $50.00 on it, WOW!!! Boy was I happy, I log on to Target and started browsing and I came across the SOG SEAL Pup. I had heard a lot about SOG and thought I would give it a try. It was right around $50.00 with free shipping so I said what the hell, why not.

When I opened my door a few days later to my surprise there was my new knife on the door step a few days early, and man I was so excited. The knife came in a long rectangular box that had pictures of the knife being used by Constructions workers, Law Enforcement, Survivalists, and Military Special Forces. When I was looking at the box I flipped it over and on the back was the companies address, and to my surprise SOG is a local company. It is based out of Seattle Wa. I had no idea. I felt good about supporting a local company, which I try to do as often as possible. After learning this new detail I excitedly opened the box. I pulled out the knife and it is freaking awesome, and the nylong sheath that came with it was just as good, it looked really cool with the SOG name patch stitched on the front and it had plenty of straps and loops to attach it to your person. It also gave the knife sheath a real tactical look. I really like nylon sheath’s even though a lot of people complain when a company only supplies them calling them cheap, I think they are great because they are light and durable and easy to clean. 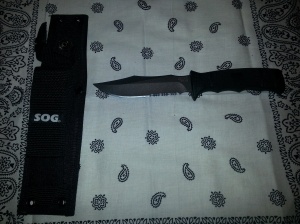 After I received my new knife and learned that it was a local company I decided I needed to know more about this company that made this totally kick ass blade. After going to their website and reading the “About Us” page I learned that the company named itself after a covert group called SOG which stood for Special Operations Group and it was a group that was created during Vietnam. I couldn’t believe what I was reading, because I just started reading a book called Hunting the Jackel. The book started off in Vietnam telling the story of Billy Waugh who was part of SOG but at the time they were a covert unit which stood for Studies and Observation Group, it wasn’t till over a decade later that the government released the truth. The company SOG was created in 1986 when a knife designer Spencer Frazier decided he wanted to make a commemorative of the original SOG Bowie knife that was made just for the SOG unit to carry on covert missions in the jungles of Vietnam. The blade was so popular that soon the company created a whole line of innovative knives and tools. The tools were field tested by the best of the best the U.S. Special Forces, they were even honored as the Navy SEAL knife of choice. The company motto is “Forged out of tradition, hardened in the field, honed for you”.

After doing some more researched I learned that the SOG SEAL Pup is a smaller version of the original SOG Bowie Knife. I was elated to have a knife that was model after such a rare blade used by some of the best warriors in the Vietnam War. While their knife was made strictly for killing mine is a utility knife and can be used for many different applications. The SEAL Pup is made out of AUS8 stainless steel that is powder coated to protect against rust and corrosion, the metal is also cryogenically frozen to increase the hardness. The metal blade is brought down to -300 degrees F, then brought back up to room temperature. This process increases the overall toughness and edge retention. The knife edge stays sharp longer with significantly less micro-fracturing and edge chipping. The SEAL Pup has one of the sharpest edges on a knife I have ever seen straight out of the box. I was extremely impressed cause I have a lot of knives made from some of the best companies in the world. The overall length of the knife is 9″ and the blade length is 4.75″. One of the most surprising things about this knife is that it only weighed 5.4 ounces, I couldn’t believe how light it was. The knife has a durable Zytel handle, the handle has great grip but its a little hard. If I had to use the knife for a long period of time I could see this definitely leaving some calluses, but thats part of being a man, right guys!!! It also came with a nylon sheath that was actually pretty good looking and it had lots of straps and loops for attaching to your belt or your tactical vest. One of the features I like best is the accessory pouch on the front, you could put a lot of usually items in it. You could put a two sided sharpening stone or if you were camping/hiking you could put some survival items in it incase something bad happens.

So overall this is a great knife that isn’t to big and heavy and it has a full tang which makes it real strong. If you need an all purpose light utility knife I would recommend the SOG SEAL Pup for any camping trip or hiking adventure you have in store. The knife is great for chopping down saplings for fire wood. I personally can vouch for that and so can the small tree’s and bushes outside my apartment, the gardeners probably didn’t appreciate having to pick up a bunch of branches and leaves that were chopped up into little pieces. It also is sharp and strong enough to split fire wood, which my neighbors probably appreciated when they went to get firewood from their stack and notice it was already split for them. It will make quick work of animal that needs to be killed and skinned for dinner, I didn’t kill any animals with it because I’m not into eating squirells or city birds but I am sure it will do the trick. Also like I mentioned above you can keep survival items in the pouch like a fire starter, fishing wire and hook, even water purifying tablets. Its also very reasonably priced and SOG has a great lifetime warranty, they will pretty much replace it for any reason, other then if you lose it or drop it in the fire and burn it up which is pure stupidity and if thats the case then you probably shouldn’t own a knife.

Thanks for joining me again here on nwtactical blog, if you own a SOG SEAL Pup and you have a story about it please leave it in the comments section or any comments you might have. Also don’t forget to click on the follow button at the bottom of the page so you don’t miss out on any posts. Also stay tuned cause there will be lots more great reviews coming up.

What's on your mind? Cancel reply

Fresh Off The Press